5 Reasons To Buy A Citroen Berlingo

5 Reasons To Buy A Citroen Berlingo

First released to the UK light commercial vehicle market in 1996, the Citroen Berlingo was a revolutionary model that defined the light-van segment. In 2008, the second generation was introduced and later facelifted in 2015.

Ten years after its last major upgrade, the third generation Berlingo van was released in late 2018. Since then, it has already been named as the 2019 International Van of the Year and the LCV of the Year 2019 by WhatVan?

The Berlingo was developed alongside the Peugeot Partner and Vauxhall Combo with other competent models in the light commercial vehicle category including the Ford Transit Connect and Renault Kangoo - so, why should you spend your money on Citroen's small van?

The third generation Berlingo is equipped with a range of new technology and features to improve upon its predecessor. As well as upgrades to the standard 'X' and 'Enterprise' trim levels, Citroen has introduced two industry-specific versions: 'Worker' and 'Driver'.

Perfectly suited to travelling around a construction or building site, the Berlingo Worker version has an additional ground clearance of 30mm compared to standard models and added underbody protection.

It's also equipped with Citroen's Grip Control system which provides switchable traction control to be able to handle different surfaces including mud, snow and sand, as well as hill descent control. The van sits on 16" steel wheels with Michelin snow and mud tyres for even more grip and improved handling on difficult terrains.

The payload is increased to 1,000kg which is monitored by the Overload Indicator - this is the only version in the lineup that receives this feature as standard. In addition, the load area gets four mid-height load securing rings and there's a 220v socket which you can use to charge a laptop on the move.

For van owners and drivers that spend a lot of time behind the wheel, Citroen has created a version with specific improvements to the cabin and ride quality. As a start, the driver receives a comfort seat with added cushioning at the sides as well as height and lumbar adjustment.

The cabin itself benefits from Citroen Advance Comfort® design principles which provide additional acoustic insulation for a quieter driving experience. It comes with the 8" touchscreen infotainment system which is compatible with Apple CarPlay, Android Auto and MirrorLink technology. In the Driver model, Citroen Connect Navigation is also included alongside voice recognition and a multi-function steering wheel.

This version is packed with helpful driving aids including the new Surround Rear Vision system - the only version in the lineup to receive this feature as standard. It adds a suite of cameras to improve rearward visibility to make parking and pulling out much safer.

For a small van, the Berlingo has a surprisingly large load area that is able to carry anything from parcels and flowers to pipes and machinery. Available in two lengths - M and XL - the load volume starts at 3.3m³ and reaches up to 3.9m³ with the extended wheelbase and longer rear overhang in the XL version. Both these figures can be increased by 0.5m³ with the addition of the Extenso pack which is standard on all models apart from the entry-level 'X'.

As standard, the load length is 1.82m in M models or 2.17m for the XL. Again, this can be extended with the Extenso pack which adds a removable panel in the steel bulkhead allowing items up to 3.1m long (3.4m in XL) to be transported. Width between the wheel arches is 1,229mm, so there's enough space to fit two Euro pallets loaded via the rear doors.

The payload varies depending on the engine and trim level you choose starting at 667kg and rising to over a tonne in certain configurations. Loading cargo is made easier thanks to the low loading floor which sits between 548mm and 610mm from the ground.

Every Berlingo receives a nearside sliding door; however, if you choose an XL version, you'll receive twin sliding side doors so you can access your load from both sides of the van. The 60:40 split rear doors are both able to open up to 180° to make loading and unloading easier.

The Extenso pack doesn't just help to improve space in the load area. With it in place, the Berlingo comes with three front seats instead of the standard two. In addition, the middle seat folds down to reveal a pivoting table that turns the cabin into a mobile office. This table is a perfect place for a laptop or to update delivery notes and invoices.

Throughout the cabin, there are 113-litres of storage space including an overhead storage unit, deep door pockets, a box under the driver's seat, a top box (large enough to store a 15" laptop) and cupholders on either side of the dashboard. The outer seat can also be folded up to provide additional storage space for items you may consider too fragile to be in the back.

In order to keep all devices charged and connected, the Berlingo is fitted with numerous USB, AUX and 12V charging connections, with extra charging ports that can be added in the load area. 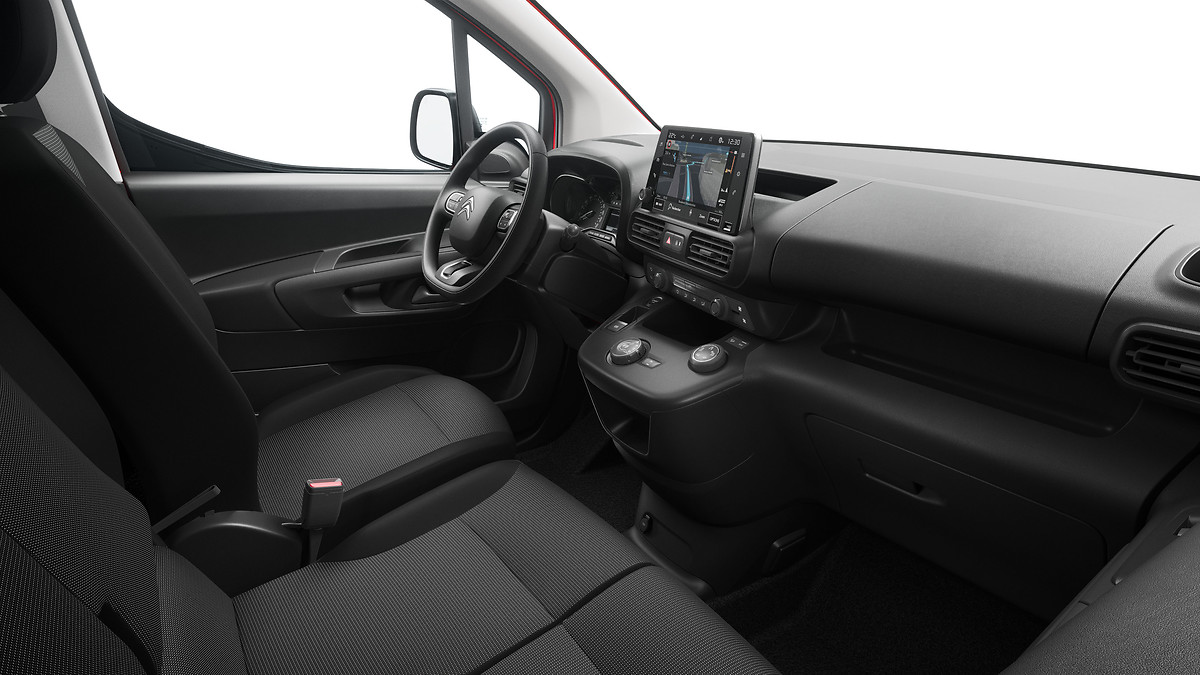 PSA Group has always produced excellent engines whether it's for their passenger cars or commercial vehicles and the range available in the third generation Berlingo is no different. You can choose:

Each of the diesel vans are able to post combined fuel consumption figures of over 60mpg. The older 5-speed 1.6-litre engines will be replaced by the slightly smaller, newer 6-speed 1.5-litre engines in smaller outputs which deliver improved efficiency and a more enjoyable driving experience. The Berlingo is offered in both manual and automatic with fuel-saving Stop/Start technology on all models except the entry-level 1.6-litre 75PS variant.

The third generation Berlingo is available with 20 Driver Assistance systems including Adaptive Cruise Control, Active Lane Departure Warning and a Colour Head-Up Display. Two of the new features that are particularly useful are the Overload Indicator and Surround Rear Vision.

Available as standard on the 'Worker' version, the Overload Indicator system uses sensors to detect when your payload is nearing or exceeding the maximum amount. This feature is particularly useful because it takes the guesswork out of potential overloading situations and prevents the effects of overloading such as decreased stability, increased strain on tyres and voiding insurance cover.

If you're pulled over by the police or a vehicle and operator services agency (VOSA) officer while overloaded, the indicator on the dashboard will tell them that you were aware of the overloaded cargo area which could result in serious consequences for you and your company.

Available as standard on the 'Driver' version, the Surround Rear Vision feature adds a camera at the top of the rear doors and a second camera on the nearside door mirror to improve your rearward visibility.

Images from the cameras are relayed to a 5" screen mounted where the rear-view mirror would normally be positioned. The rear camera provides a constant feed of everything behind the van while you're driving (just like a rear-view mirror) and makes it easier for you to judge distances when parking. The side-view camera helps to boost vision in the nearside blind spot which is a common problem for the majority of van drivers.

If you think that the Citroen Berlingo is a perfect fit for your business, search our stock online today.