4 Reasons To Buy A Citroen Relay

4 Reasons To Buy A Citroen Relay

Citroen vans have become extremely popular in the van world. They are reliable, trustworthy, make excellent work vans and have all the functionalities that you need both for work and for pleasure. But of course, there isn't just one Citroen van, there is a few of them.

First released to the UK light commercial vehicle market in 2006, Citroen introduced the Relay large van to complete its LCV lineup. In 2014, the second generation received a number of cosmetic updates including a new grille bringing the design closer to the passenger car range.

Originally, the Relay was available with a choice of 2.2-litre and 3.0-litre turbodiesels. In order to meet the new Euro 6 emissions regulations, the engine range was updated to a newly developed 2.0-litre BlueHDi diesel which is available with three power outputs: 110hp, 130hp and 160hp.

The Relay was developed alongside the Peugeot Boxer and Fiat Ducato with other competent models in the large van category including the Ford Transit, Mercedes Sprinter and Volkswagen Crafter - so why should you spend your money on Citroen's largest model?

The Citroen Relay van is an extremely good example of exactly why Citroen vans are so popular. Here in this blog, we are going to go into detail, the main 4 reasons that we think you should be aware of, to give you the best possible understanding of whats makes them so good...

As you might expect from a large van, the Citroen Relay is available in a range of dimensions - including four lengths, three wheelbases and three heights - so you can pick the version that's perfect for your business or personal needs.

At 2,172mm high, the H3 versions of the Relay boast class-leading load height. This is around 30mm higher than both the Mercedes Sprinter and Volkswagen Crafter competitors. In addition, every Relay is fitted with a steel bulkhead that fits the full height of the van as standard.

These figures mean that the Relay has one of the best capacities in its class. However, it is important to note that the largest versions weigh over four tonnes - a standard driving license issued before 1st January 1997 only allows you to drive vehicles up to 3,500kg - so you may need to pass additional tests. If you're unsure what vehicles you're allowed to drive you can check your driving licence information and find out how to add higher categories to your licence if necessary. 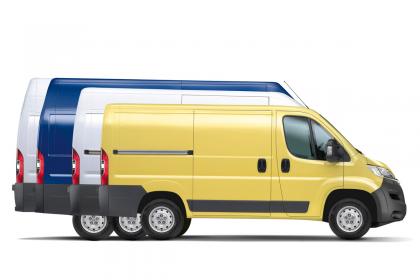 Prior to being released, the latest model was subjected to a rigorous testing programme to ensure that individual parts would be able to stand up to consistent heavy-duty usage. Indeed, Citroen completed more than 4 million kilometres of test driving on tyres that were specifically chosen because they're a common and cost-effective size. So, when your tyres need changing, or if one gets a puncture, the van won't be off the road for long and it won't break the bank for a replacement.

As part of the van's durability testing, engineers conducted over 500,000 door slams to test the new higher strength door hinges. The sliding side door(s) have also benefitted from reinforced rails, redesigned runners and improved door locks which all contribute to increased security and durability. The brakes on the second generation Relay have been improved to make them more effective and quieter.

To help reduce running and repair costs over time, the Relay has been built with some clever features including front and rear bumpers that are assembled from three separate pieces. If there's only a small amount of damage contained within a single section, only one part of the bumper needs to be replaced rather than a whole new bumper having to be ordered and fitted.

Before 2016 and the introduction of the 2.0-litre Euro 6 engines, the Relay had 25,000 mile service intervals. This has been extended to 30,000 miles or two years, whichever comes first.

As mentioned above, the Relay's load area can reach up to 17m³ in the largest version. Every Relay comes with a nearside sliding door as standard which opens up to 1,250mm wide - this is enough space to fit a Euro pallet in either length- or width-ways.

In addition, the class-leading load width of 1,870mm (1,422mm between wheel arches) can easily accommodate a Euro pallet or 8x4 sheet completely flat, even in the smallest configuration.

In the cabin, there are 13 useful storage spaces including an overhead compartment and two separate bins on both of the front doors. When there's no one sitting in the middle seat, you can fold the back down to reveal a table with two cupholders and a clip to keep any paperwork in place. There's another clip incorporated into the centre of the dashboard which you can use to organise delivery notes, invoices or any other paperwork.

If you're not using your phone for directions, there's a dedicated little cubby hole as well as a small glovebox. A second lockable glovebox is located in the centre with enough space to store a laptop or tablet. 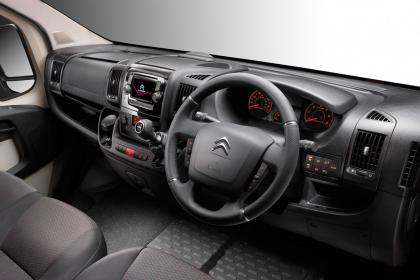 The Citroen Relay large panel van can also be purchased as a crew van, chassis cab and in a range of 'Ready To Run' conversions including tipper, dropside and Luton. In fact, the Ready To Run programme won the 'Best Conversion Range' title at the 2017 Trade Van Driver Awards.

It's estimated that around a quarter of customers purchasing light commercial vehicles have specialist requirements to fulfil their business needs. The pioneering Ready To Run programme provides ready-bodied conversions on the Plus range of the Relay 35 Chassis Cab that meets European standards and has a maximum gross weight of 3,500kg.

The dropside and tipper both offer easy loading and unloading on site with an open load bed that is perfect for transporting a mix of loads and equipment. Alternatively, Luton conversions provide additional storage space to the standard panel van by using space above the cab and leaving the load area free from intruding wheel arches. 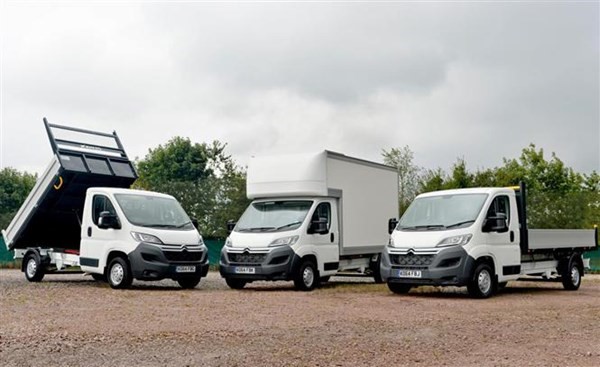 If you think that the Citroen Relay - either as a panel van or conversion - is a perfect fit for your business, search our stock online today.